The Evolution Of The Goalkeeper Gloves

The Evolution Of The Goalkeeper Gloves

The history of goalkeeper gloves is contentious, even though it is a major equipment in today’s football. There is no recognized timeline or record of evolution with regards to their development, unlike say the England football strip or the modest football boot.

Yet back in 1885 a British football manufacturer,named William Sykes was granted a patent for a pair of “leather gloves” or gauntlets used in football playing. Sykes’ design incorporated a layer of India rubber to help protect and cushion the keeper’s hands but for reasons lost in time, he decided not follow through on his original idea and shelved his design rather than go into mass production.

Forty years before Carrizo (who is often reputed to have been the first goalie to wear gloves) Wales international Leigh Richmond Roose, often took to the field in a pair of white gloves whenever the weather was bad. Even a cigarette card from 1909 depicts the goalkeeper during his time at Sunderland Football Club complete with woollen mitts.

But goalkeepers did not generally wear gloves in the early 1900s and also there is no mention of gloves in the original 1863 Laws of the Game.

In the 1940s- 50s many keepers used woolen, cotton or leather gloves. However, cotton gloves more regularly seen in gardens, many keepers continued to look for alternatives to the leather and woolen varieties. Some preferred to dispense with gloves altogether, preferring other methods of protection. Arsenal goalkeeper, Wales international Jack Kelsey went so far that he rubbed bits of chewing gum into the palms of his hand before a game to improve his catching. Yet even these new varieties still suffered the same problems in bad weather, particularly in wet or snowy conditions.

The use of goalie gloves became more common in the late 1960s and early 1970s, but many goalkeepers still only wore them in wet conditions.

England’s one of the greatest ever goalkeeper, Gordon Banks was also wearing gloves, what appear to be gardening gloves.

The 1970s marked a turning point in goalie glove history. As gloves became more popular the demand for specialized goalkeeping gloves increased. There were manufacturers such as Reusch, Stanno and Uhlsport.

By the 1980s the goalie gloves had become a fundamental piece of football equipment. This brought a huge design advancement. Manufacturers began to put more research into their designs, especially the grip. They experimented terry cloth, the coating of table tennis paddles and latex foam.

By the 2000s goalie glove technology has advanced dramatically since the 1980s. Latex foam treatments have allowed a stickier and more durable gloves, while various moldings have added a completely new vocabulary to the industry. 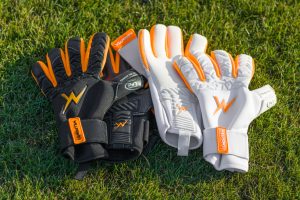 Could you imagine goalkeeping without gloves or in gardening gloves?